Pope Plant Ltd was appointed the principal contractor for restoration works at Reigate, based on previous works of a similar nature at Wrotham quarry earlier in the year.

The works involved the careful planning with particular attention applied to the RAMS to come up with a suitable safe method of works on the upper perimeter track around the quarry.

The pumping system to de-water the site had already been de-commissioned allowing the quarry to flood. The water had risen to such a level as to nearly cut off the access route for plant, this was due to a delay in the awarding of the works. Pope Plant Ltd had to spend an additional 2 weeks carefully placing a sand buttress under the water to try and stabilise the access route. Once partially stabilised, a temporary bailey bridge had to be put into place to allow the trafficking of demolition contractor’s plant to de-commission the conveyors and plant buildings.

Pope Plant Ltd had to work on tight timescales to complete the restoration works involving shaping and top soiling bunds before the water within the quarry rose too much.

Demolition and restoration contract was completed without a day to spare and the bailey bridge was removed in emergency before being submerged under water.

Pope Plant Ltd carried out the works to the satisfaction of Hanson’s and the landowner to within budget including all the additional works.

A new pumping system has now been installed to hold the water at the current level whilst further surveys are completed due to excessive erosion of the sand quarry face.

Further works may be required upon the geologist reports in 2015.

“Pope Plant Ltd had to work on tight timescales to complete the restoration works involving shaping and top soiling bunds before the water within the quarry rose too much.” 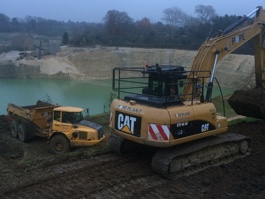 “I would not hesitate to invite Pope Plant ltd to bid for future earthworks projects with Hanson, and
recommend them to any prospective clients.”

Highlighting the extent of this Cell build excavation with our 35t Komatsu excavator just visible in the bottom 👍 ... See MoreSee Less

Ever increasing landfill Cell
Adding an awkward chunk of clay engineering whilst the sun shines🌞
One of the largest, if not the largest landfill Cells constructed in the South East this year.
Cell 9 almost complete 👌 ... See MoreSee Less

Finally after overcoming massive ground water problems , variations to the contract and unforeseen issues!
We finally achieved formation and began clay engineering works this week on one of the largest, if not the largest, landfill Cells under construction in the South of England
Onwards and upwards 👍 ... See MoreSee Less